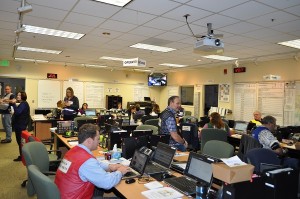 My team works with many emergency managers who inherit programs and see an Emergency Operations Plan update as a way to reignite their program. There are better ways to do that, but for those who go the EOP route first, they sometimes get hung-up on organizing who goes where. Frankly, it doesn’t help when Incident Command System (ICS) training is taught to emergency operation center staff by former field responders. It also doesn’t help when a well-intentioned state or federal coordinator says, “your mayor, the governor and the president are now managing this incident in unified command.”  Rather, incident command and event management are quite separate operations, and contemporary doctrine really doesn’t distinguish the latter very well. Below is how I explain it.

One of many important functions of an emergency plan is to describe the organization of multiple agencies during an emergency. Larger jurisdictions typically exhibit more complexity. One way to simplify a complex response is to employ emergency operation centers (EOCs), department operation centers (DOCs) and incident command posts (ICPs).

Organizations employ ICPs to better manage field response. A fire battalion chief directing multiple engine crews during a large structure fire or a police sergeant leading a house-to-house search are two examples of incident commanders who establish ICPs to collect information and provide instructions. Other, non-traditional response agencies may assign incident commanders and create their own ICPs. For example, a public works agency may assign a field supervisor or project manager to remove debris from a drainage channel before a flood occurs. When multiple departments or agencies are responsible for an incident and require close coordination (i.e. when fire and law agencies respond to large wildland/urban interface fires), they may also establish Unified Command (UC) to better coordinate the efforts of one or more agency ICPs.

ICPs and UCs manage tactics like extinguishing fire with water or retardant, securing a perimeter or stabilizing and transporting patients. Incident Commanders (ICs) – those who manage ICPs – are automatically selected (i.e. by virtue of being the most senior officer on-scene) or selected by their agency leadership because of their proximity to an incident or a unique skill or experience they possess.

Department Operations Centers (DOCs) are used by departments to coordinate and support one or more ICPs from a remote and more convenient location. Fire and police dispatch facilities serve as a form DOC on a regular basis. They provide department-wide policy, support and coordination. They maintain direct contact with their ICPs and provide various forms of support including information, policy and resources. DOCs are managed by watch commanders, assistant fire chiefs and program managers. Other examples of DOCs exist as public health, emergency medical, social services (i.e. for care and shelter), and public works (i.e. for debris clearance) operation centers. One important feature of a DOC is that agency executives still retain authority over incidents regardless of whether they participate at the ICP, DOC or in their office. ICs are accountable to agency executives as are DOC managers. Executives who want to “command” incidents need to carefully consider whether they are available and necessary for that particular job. A common complaint about some executives is that they’re difficult to find or retain during an event. Press conferences and meetings require more time and effort than most executives expect during an emergency.

Emergency Operation Centers (EOCs) are different from ICPs and DOCs because their role is to coordinate multi-agency information, activity and policy at the highest level in a jurisdiction or organization, again, away from an incident location. Most importantly, EOCs manage strategic outcomes. If a city manager wants to know if all information about a complex incident is collected, analyzed and shared adequately, she or he would visit a properly-organized EOC. Similarly, resource sharing among departments (i.e. employing large dump trucks from public works to effect an ad-hoc, high-water rescue coordinated by law enforcement) is easily coordinated within an EOC by the respective department representatives. The figure below illustrates the organization of ICPs, DOCs and an EOC with a jurisdiction.

Despite their location away from incidents, EOCs can be vital to an effective jurisdiction response. They unite all relevant agencies to establish and maintain a “big picture” view of an incident, coordinate information and activity between departments, and establish policy necessary for DOCs and ICPs to support strategic outcomes. EOCs also play a critical role in coordinating support from other levels of government and elected leaders.

Typically, EOCs do not maintain contact with ICPs, but share information through different department representatives assigned to the EOC (i.e. someone who represents a social services department and DOC from which care and shelter operations are conducted).

When a jurisdiction-wide policy needs to be communicated (i.e. proclamation of emergency or order of mandatory evacuation), the EOC shares this information with DOCs that, in turn, share it with ICPs.

Similar to agency executives and their DOCs, elected or appointed leaders do not shed responsibility or abdicate authority by not working in an EOC. They simply delegate responsibility to an EOC Director and staff who remain accountable to elected and appointed leaders. Sometimes, however, a structure is needed to formally integrate elected and appointed leader input into EOC activity. Such structures are generally referred to as Multi-Agency Coordination (MAC) groups. MACs can monitor and provide executive-level input for ICPs, DOCs and EOCs without necessarily subjecting executives to operational decision-making. MACs have been effective, for example, in large, regional fire emergencies and when city councils, county commissions or boards need to provide input.

As planners create and revise emergency plans, they help departments determine where people will go and what they will do during an emergency. This, in turn, determines the training they will receive. Organization and individual assignments are recorded in two important emergency plan appendices: points of contact for emergency personnel; and emergency facility contacts. Emergency personnel contact lists show how people assigned to an EOC, for example, may be contacted. An emergency facility list provides contact information for the EOC, DOCs and other facilities providing critical support.

By organizing how responders are directed in the field, supported by departments and, ultimately, supported by their jurisdictions, emergency managers can greatly enhance emergency operations. The image at the top of this blog post shows a recent EOC activation in one the largest cities in the U.S. (population >1,000,000 people).  The program employees three staff members and operates on approximately $25,000 in annual, discretionary funding. It employs ICPs, DOCs and an EOC to effectively manage all of the city’s emergency resources.

Get Update By E-Mail